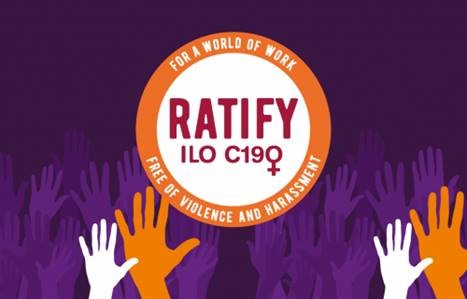 UASA is pleased to see that the government is making progress in the process of ratifying the Convention 190 (C190) of the International Labour Organisation (ILO) as announced by Pres. Cyril Ramaphosa during his nation address on the progress of South Africa to contain the Coronavirus pandemic earlier this week.

The C 190 advocates for the protection of women and the elimination of violence and harassment in the world of work and at home. During his address, Pres. Ramaphosa declared Gender-Based Violence (GBV) and Femicide as South Africa’s second pandemic.

UASA is deeply concerned about the high rate of gender-based violence and femicide cases in South Africa as vulnerable women and children continue to be victimized. We call on the government to act with haste on the ratification process of the ILO C190.

It is sad to see thousands of our fellow women and children living in fear and threatening conditions of gender-based violence or sexual harassment at work. According to the World Health Organisation (WHO), it is estimated that 12,1 in every 100 000 women are victims of femicide in South Africa each year which is five times more than the global average of 2,6. While more than 53 000 cases of rape were recorded in 2020.

With such efforts underway, UASA urges the government to ensure the final ratification process is observed as a matter of urgency.

For further enquiries or to set up a personal interview, contact Stanford Mazhindu at 065 1700 162.