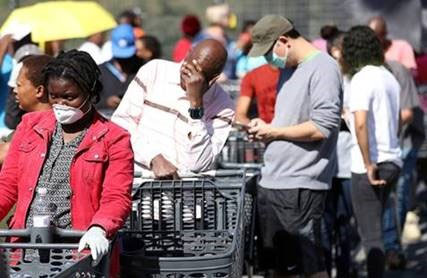 UASA is deeply concerned about the massive job losses we see as a result of the Covid-19 pandemic. According to a new study approximately three million people in South Africa lost their jobs between February and April 2020.

The National Income Dynamics Study (NIDS) Coronavirus Rapid Mobile Survey (CRAM), found that vulnerable groups were affected the most, with women accounting for two million of the jobs lost. It also found that unless there is urgent intervention to assist those who have lost their jobs, famine will be on the doorstep of many workers’ homes.

Although these findings are estimates and should be treated as tentative until more data is revealed, they do however provide us with a rough picture of the effects the Covid-19 pandemic has had on jobs in South Africa.

Consumer price inflation (CPI) for May this year eased to 2.1%, the lowest in 16 years. This is way below the CPI target of 4.5% and occurred despite the Reserve Bank reducing the repo rate by 275 basis points since the start of 2020.

UASA, after consulting with a leading economist, believes that the Reserve Bank’s Monetary Policy Committee (MPC) should introduce a further repo rate cut of at least 50 basis points in their meeting later this month to help stimulate the economy.

South Africa is already in a recession and lack of consumer demand is expected to increase further as companies close down, workers lose their jobs and salary cuts are introduced on a wider scale.

We are in unchartered territory and UASA demands decisive leadership and decision making from the government to help us navigate these difficult times. Failure to do so at this very crucial time will push the country to the brink of no return.