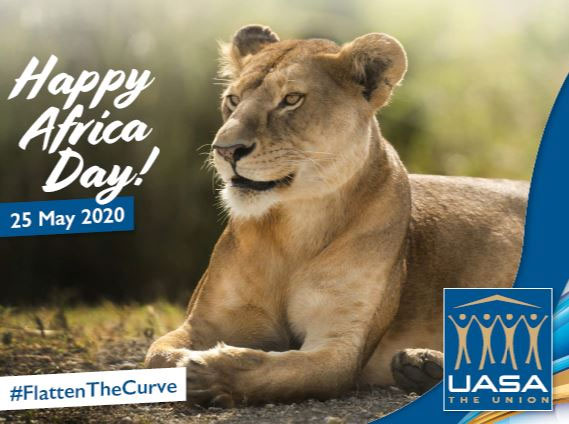 Africa Day, the annual commemoration of the foundation of the African Union (AU) previously known as the Organisation of African Unity (OAU), came into existence 57 years ago and has been celebrated on 25 May ever since. The day also serves as a reminder to unite as Africans on the continent towards a better Africa for all.

Today, 25 May 2020, UASA urges all workers, trade unions and federations across the continent to unite in solidarity and fight for better conditions in the workplace.

Working conditions in Africa remain tainted with discrimination, stereotypes, xenophobia and exploitation. Workers tend to suffer in silence because governments are not doing enough to protect them from exploitation.

Many are employed but earn so little that they live under the poverty line. Last year the International Labour Organisation (ILO) found that almost 33% of those employed in Africa fall in the category of the working poor. In 2018 Africa’s working poor represented more than half (56%) of the world’s working poor.

In Botswana and Namibia legislation favours employers, while unions are fighting unfair dismissals and retrenchments. In Zimbabwe workers earn paltry wages that sometimes consist of a few grocery items like cooking oil, maize meal, sugar and salt. The Marange diamond fields in Zimbabwe are guarded by armed soldiers, and unions have no access to workers

On this Africa Day, UASA calls on all trade unions and federations across the African continent to push for the betterment of workplaces. Once we are united in the same fight, we are able to collectively fight for our people and their upliftment and in so doing, we slowly eradicate socio-economic issues plaguing the continent as a result of poverty.

UASA has advocated for the betterment of all workers’ rights, not only in South Africa but across the continent. We partnered with global trade union IndustriALL in Lesotho where UASA offered training to shop stewards in the diamond sector.

It is our strong belief that when employees are properly educated about their rights in the workplace, employers cannot exploit them.

Happy Africa Day to all