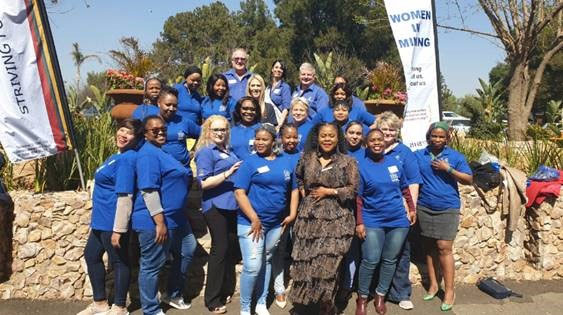 A gender data base showing exactly how many women are employed in the mining industry and what positions they hold and female specific stumbling blocks such as the lack of protective clothing designed for pregnant women in the mining sector were of the topics discussed on the first day of the Women in Mining Indaba 2019 that is currently underway at the Lakes Hotel and Conference Centre in Benoni, Gauteng.

The two-day indaba places issues that affect women in mining at the forefront while educating and empowering women to overcome problems such as gender based violence and sexual harassment in the workplace.

One of the speakers at the indaba, UASA representative Carika van Aswegen Pienaar, a Winding Engine Driver at KEM-JV in Kimberley, elaborated on how UASA represents its female members in the mining industry. She emphasised how women – although equal to men – had women specific issues that needed urgent attention.

Magdalene Mokoena from the Department of Mineral Resources and Energy presented the department’s strategies for empowering women in mining. “There must be a gender database that can show us exactly how many women are employed and what positions they hold,” she said, adding that facts and figures would assist in closing gender gaps.

Other issues discussed included wellness and psychosocial issues, safety and security as well as pre- and post-natal challenges that affect women employed in mining.