DON’T BE TEMPTED TO LIE ON YOUR CV 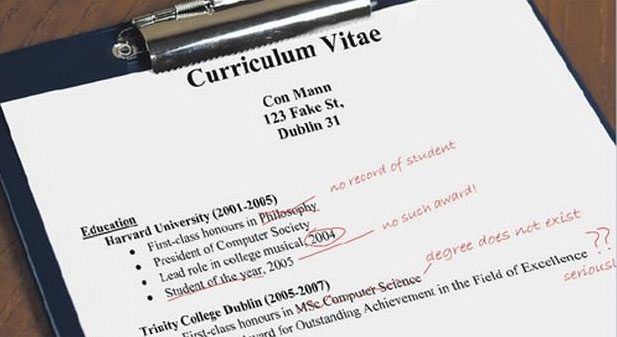 Early in the new year the matric results will be announced and thousands of hopeful young South Africans will flood the job market.

Add to that the newly graduated and diploma holders and it becomes clear that the competition for employment will be just as intense as every other year.

To increase their chance of success, there are those who will misrepresent the facts in their CV’s. Research as shown the aspects of a CV that are most frequently misrepresented or incorrect are skills. Job titles, responsibilities, period of employment, reason for leaving and employment history.

Background screening company Managed Integrity Evaluation (MIE) conducted over 462 000 qualification checks. Of the total number of qualifications verified, 15.17% were found to be either fraudulent, misrepresented or cancelled.

In 2018, there was a sharp increase in the number of fraudulent qualifications that were reported to regulatory bodies such as the South African Qualifications Authority. Higher Education Minister Naledi Pandor revealed that the number of reported cases spiked from just 37 in 2011/12 to 982 in the 2017/18 financial year.  The real number may be even higher.

While this may seem like a tempting short cut to employment, job seekers should not fool themselves that they will get away with it.

Fake credentials have become so common in South Africa that it necessitated the new National Qualifications Framework Amendment Act of 2019, recently signed into law by Pres. Cyril Ramaphosa. The Act means that prospective students or job seekers could face up to five years in jail for misrepresenting their qualifications.

Misrepresentation is when you deliberately indicate that you have a qualification when in fact you don’t. This is punishable by law.

Before you are tempted into cheating, consider the following:

Remember there is a clear line between showing yourself in the best possible light, and deliberate misrepresentation. Make sure you make the right choice. Giving in to temptation will put a stain on your career that may be difficult to remove.