CELE, MBALULA MUST DO THEIR UTMOST TO PREVENT FURTHER ATTACKS ON GOLDEN ARROW BUSES 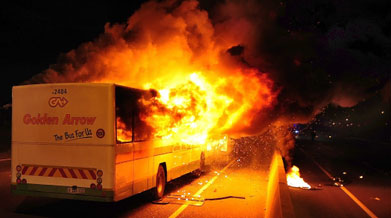 Police Minister Bheki Cele and the Minister of Transport, Fikile Mbalula, have vowed to intervene and act on the City of Cape Town’s call to establish a dedicated unit to investigate the ongoing attacks on public transport and its commuters in the Western Cape.

UASA welcomes the call as the time to save jobs and the lives of our members working for Golden Arrow and other workers who depend on private bus services for transport, is long overdue.

Golden Arrow buses have been under attack since last year, leaving drivers, staff members and passengers under threat of violence and fear of travel. With our economy already in the doldrums, attacks on Golden Arrow buses is the last thing we need.

South Africans lead an unsafe existence on so many levels, we must ensure that our people can live in a safe and unthreatening environment. We can do that by ramping up the economy, increasing job retention and better policing. The Covid-19 pandemic has added to the ranks of the unemployed and criminal behaviour.

UASA will protect its members employed at Golden Arrow to the bitter end. These are real people with families to take care of and bills to pay.

We encourage Cele and Mbalula to pay heed to Cape Town’s call and take steps to prevent any further attacks on innocent travellers.